Florida Crackers - Cowboys on the Range 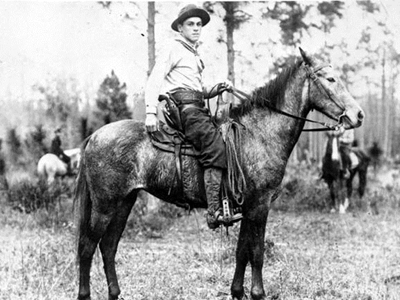 You'd be hard pressed to hear one now, but starting in the 1860s the cracking sound of cowboys' whips filled the air as they drove herds of lean cattle through the scrub brush of Osceola's open ranges. Heartier Brahma cattle introduced in the 1930s improved on our beef.

Pejoratively dubbed "Cracker Cowboys" by Frederic Remington in an 1895 article in Harper's New Monthly Magazine, the Florida cowboy used dogs and whips to herd their cattle with such great skill that some could kill a rattlesnake and turn stampeding cattle.