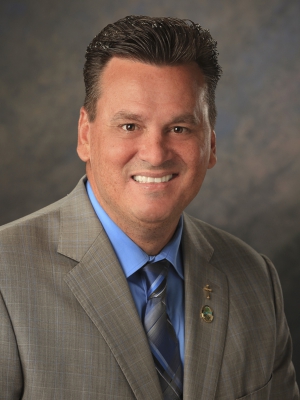 Commissioner Fred Hawkins, Jr. is a long-time resident of Osceola County and is serving his third term on the Osceola Board of County Commissioners.  He was first elected in 2008 and has served as Chairman in 2010, 2014, and 2017.

Commissioner Hawkins represents District 5, a mostly rural area that extends east to neighboring Brevard County and south to Indian River County. Within District 5 are the city of St. Cloud and the development of Harmony, a vibrant residential community that promotes a balance between humans, nature and pets, the ever-growing and thriving Narcoossee Corridor and the pastoral communities of Kenansville and Holopaw.

He currently serves as Osceola County’s representative on the Board of Directors of the Central Florida Expressway Authority, the Orlando Economic Partnership, the St. Cloud Chamber of Commerce and St. Cloud Main Street.  He also serves on the Board of Trustees for the Public Risk Underwriters of Florida, Inc.; He recently served as Chair of the Central Florida Expressway Authority (CFX). He has served as Chairman and Vice Chairman of the Osceola County Planning Commission, Vice Chairman of the Osceola County Charter Review Commission, and Chairman of the Republican Lincoln Day Dinner. He has also served on the Board of Directors for the Florida Association of Counties, Greater Osceola Partnership for Economic Prosperity (GOPEP), Harmony Institute, the Boys & Girls Club, the Children's Advocacy Center, Community Vision, and Central Florida Commission on Homelessness, Workforce Central Florida, the East Central Florida Regional Planning Council, and the Foundation for Osceola Education, and was a member of the St. Cloud Hospital’s Advisory Board of Trustees and GOPEP’s Agricultural Advisory Committee.

Commissioner Hawkins remains close to his roots and heritage by serving his community and participating as a member of the Silver Spurs Rodeo, the Kissimmee Valley Livestock Show & Fair (KVLS), and participating in 4-H Club events.

In March 2014, Commissioner Hawkins received the prestigious Golden Eagle Award from Boy Scouts of America. This award recognizes men and women -- both in and out of Scouting -- who are champions of community service and who display the qualities embodied in the Boy Scout Law.  In May 2019, he received another Scouting honor -- the Silver Beaver award -- for his outstanding contributions to the Central Florida Council Scouting program. It is the highest council-level distinguished service award given by the Boy Scouts of America.

Commissioner Hawkins graduated from the University of Akron with degrees in Pre-Law and Political Science, and is the President and CEO of the Osceola County Education Foundation, He, his wife Tiffany, and daughter Kendrie, live in St. Cloud.