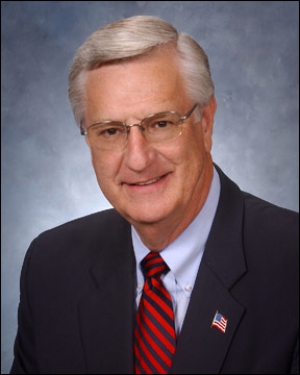 Ken Smith has woven his personal story into the fabric of Osceola County for over forty years. Graduating from Asbury College in Wilmore, Kentucky, he exhibited his good sense by coming to Osceola County, rather than returning home to Apopka, to accept a teaching position at Osceola High School in 1965.

Some thirteen years later, after earning a Masters Degree from UCF, Ken parted ways with Osceola High School, but not before having a profound effect on a generation of students. Hardly a week goes by in his political life when a former student does not cross paths in one leadership position or another; a nice reward for someone who taught Government for so many years.

In 1978, Ken accepted a position at C.H. Lucas as a principal officer of that real estate firm and started to put into practice those lessons in government he taught for so many years.

In 1998, 2002 and again in 2007, he was re-elected to the Board of County Commissioners, serving a year as Chairman and twice as Vice Chairman.

In his private life, Ken has remained close to his first love, the youth of this County. Serving as President of the Foundation for Osceola Education, he is a tireless fundraiser for scholarships and mentorship programs, as he champions the right of every child – rich or poor – to an education that prepares him or her for whatever the destiny of our region may be.

Ken and his wife, Jennifer, are active members of the First United Methodist Church of Kissimmee.