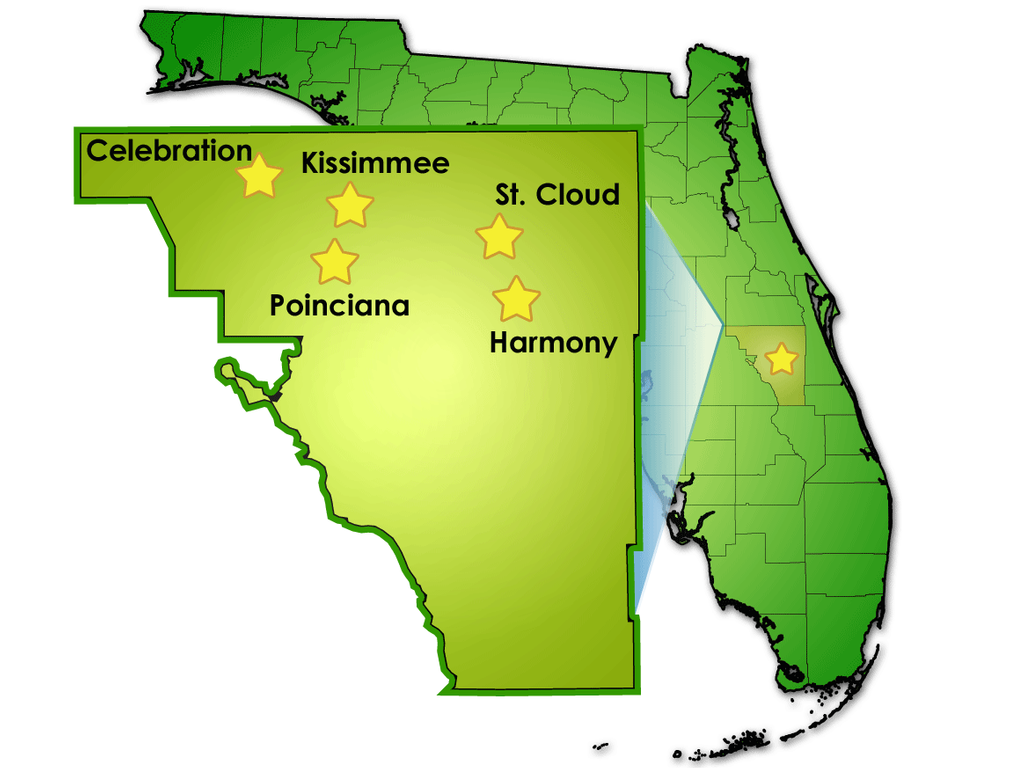 In the pages contained here, you will find more information about the government, including its history, demographic information, county maps, descriptions of our government and more.

If you wish know or wish to know more about Osceola County than we have posted here, please send us your request or information to pio@osceola.org.

Osceola County was created in 1887. Osceola County is a 1,506 square mile area that serves as the south/central boundary of the Central Florida Region and the Greater Metropolitan Area. The City of Kissimmee, the County Seat, is 18 miles due south of Orlando. Osceola’s only other incorporated City, St. Cloud, is 9 miles east of Kissimmee, and approximately 45 miles west of the City of Melbourne on the Atlantic Coast.

Beyond this northwest quadrant and to the south and east with the exception of a few very small, rural towns, like Holopaw, Kenansville, and Yeehaw Junction, ranch lands and undeveloped prairie, woods and marsh dominate the County. These large regions include the Mormon Church owned Desert Ranches and a number of other large, privately operated ranch and agricultural lands. Also included are the State of Florida's wildlife management areas and preserves at Bull Creek, Prairie Lakes, and the Three Lakes. As the "headwaters" of the South Florida Water Management district and the Lake Okeechobee/Florida everglades ecosystem, Osceola County is bounded by the Kissimmee River, is crossed by a number of partially accessible creeks, and is home to the Kissimmee Chain-of-Lakes, that includes some of the State’s largest and finest fishing and recreational attractions.

An urban and urbanizing area in the northwest quadrant of the County dominates Osceola County's geography. This area is adjoining to Polk and Orange County and includes most of Osceola's population. It includes the incorporated areas of Kissimmee and St. Cloud, the unincorporated communities of Poinciana and Buenaventura Lakes, and unincorporated subdivisions ranging from Narcoossee in the northeast to Campbell City and Intercession City in the southwest to Deer Run and the St. Cloud Manor areas in the south.

Osceola's economic base is dominated by tourism, serving as a "gateway" to Disney World and other Central Florida attractions. The area's historical investments in ranching and citrus are still very strong, while light industry and service enterprises are growing due to Osceola's transportation advantages and proximity to the Greater Orlando area.

Each independently elected Constitutional and Judicial Officer hires managers and staff to direct daily operations of their agencies. These employees are not governed by County Commission rules and serve at the pleasure of those elected officials, with the exception of the new State Career Service protection for certain Sheriff’s employees. Further, civil service or collective bargaining units.