Formed on May 12th, 1887 from portions of Orange County and Brevard County, Osceola County became Florida's 40th county. Named after the famed Seminole leader, this area was a transportation hub in the late nineteenth century for riverboats and railroad. It readily began a cattle, sugar, and lumber-based economy.

Osceola County's 1,506 square miles include the cities of Kissimmee (incorporated in 1883 and the county seat) and St. Cloud (incorporated in 1911), as well as numerous communities. The city of Kissimmee has always had a strong historical association with the Florida cattle frontier, and the city of St. Cloud has roots that trace back to a northern land baron who began a sugar plantation in 1881.

Osceola County's oldest communities include Narcoossee and Kenansville. Narcoossee was home to numerous British immigrants who brought with them a love for the sport of polo. In fact, a team was created in 1888 and grew to more than 100 members just two years later. Kenansville is in southeast Osceola County and was named for railroad mogul Henry Flagler's third wife, Mary Lily Kenan Flagler, once he donated five acres and $6,000 to build a schoolhouse in 1911. 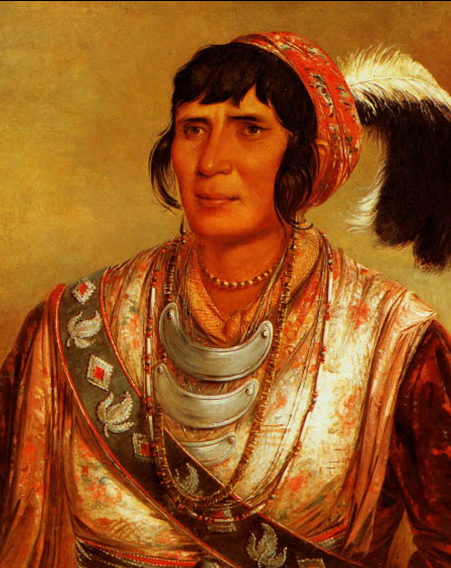 Osceola County derives its name from Billy Powell, son of British trader William Powell and his Creek wife Polly Copinger. Born in Alabama in 1804, Powell adopted the name Osceola, which means "black drink crier", at a tribal ceremony around 1820. After leading several small but successful raids against the Army over the next decade, Osceola was captured on December 31, 1837, and died one month later at Fort Moultrie in South Carolina. Osceola was never a "Chief," but was a feared and respected leader, nonetheless. 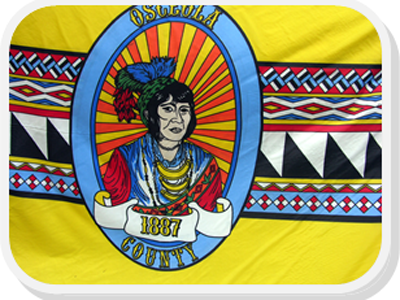 J. Luann Griffin designed the official County flag shortly after the County logo was created. She used several elements from it, including the lettering, oval, date banner and radiating lines. Ms. Griffin’s design included Seminole leader Osceola highlighted by a brilliant sunburst representing the name he was commonly known as, 'The Rising Sun.' The oval rests on a band of traditional Seminole handiwork in tribute to the Seminole leader for whom Osceola County was named. The background color, yellow, is representative of Osceola County sunshine, nurturing residents and drawing visitors to our beautiful county.

Your brand is what people say about you when you’re not around. In other words, your reputation! Just like people or products, communities have reputations based on all the different experiences people have with a community over time. Branding is the process of changing, clarifying, refining, or improving that reputation. The stronger and more defined our reputation, the more people will want to live, do business and visit here. Our brand is not simply a logo or a tagline -- our brand is a set of ideas and images (including a logo) that set an expectation of what our community is about. Our brand is our unique story.

In 2020, Osceola County Government began a year-long process to determine a forward-looking brand identity for the County to reflect the current residential and business community along with the long-term strategic vision determined by the Board of County Commissioners.

Our branding process was a research-driven, community-wide initiative with the goal of having Osceola County stand out and stand up as we grow toward our preferred future. The first step relied on the community’s involvement to figure out Osceola County's existing reputation, uncover perceptions and attitudes, along with determining our greatest strengths and what makes us special and unique.  Both virtual and in-person focus groups, one on one interviews, and an in-depth survey were conducted, both in English and Spanish. Additionally, this survey and interview research process was extended outside our County’s borders to gain knowledge of perceptions and attitudes from around the state and involved in key industries related to our economic future.

As the process continued, a color palette, tagline, logo and looks were developed alongside a brand narrative that encapsulated the current community spirit. This brand identity was publicly unveiled at the State of Osceola County event held in October 2021, launching the vision that Osceola County will “Be first to what’s next.”

The tagline -- “Be first to what’s next.” – has an active and inviting quality and positive feeling of forward momentum, embracing our advancements in technology, business, culture and more. At the same time, it invites those who do not already know us to imagine or be curious about “what’s next” and to want to be a part of it.  The statement “Be first to what’s next” realizes the idea that those choosing Osceola as their place to live or do business are in the right location for Central Florida’s next phase.

The County logo features an icon with an “O” set inside a diamond shape created by vibrant tones of purple, blue, green and orange. The bright, bold palette and design, evocative of a kaleidoscope refracting light into a multitude of color, symbolizes the diversity and inclusiveness of the Osceola County community and the “bright” future ahead. The icon has a sense of upward motion and the lightest color combination is used on the right to push the eye forward to the Osceola County wordmark.

Even with a forward-looking identity, the history and heritage of Osceola County were a significant part of the creation of the new Osceola brand.  With a desire to honor our history, Osceola County’s Heritage Seal will coexist with the new brand identity, continuing to appear on official documents, proclamations, certain government venues and more.

To learn more about the new brand identity, the development process and its relationship with the Heritage Seal, read our commonly asked questions here.

The Heritage Seal used by Osceola County was designed in 1987 by Barni McIntire, a local artist and long-time resident, as part of the County's centennial celebration. Commissioned by the Osceola County Centennial Committee, the artistic design represented the county's beginning, and highlighted our beautiful weather, economy and heritage. 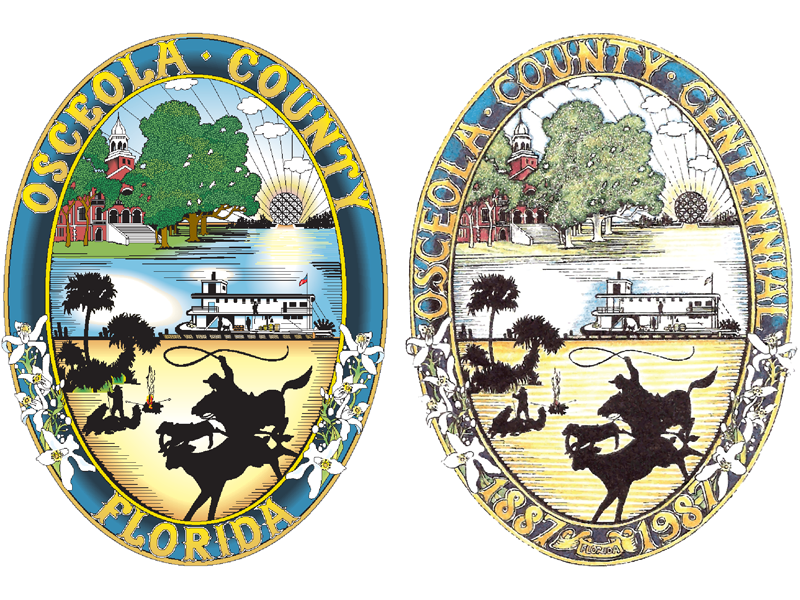 Why did Osceola County develop a new brand?

Just like people or products, communities have reputations based on all the different experiences people have with it over time. Community branding is a process that clarifies and refines a reputation to help a community reach its preferred future. The stronger and more defined our brand and reputation, the more we can positively influence those considering living, working, investing and visiting here, strengthening our community as a whole. Our brand is not simply a logo or a tagline; it represents a set of ideas that establish an expectation of what our community is about to both our residents and those learning about us. Our brand is our unique story.

By re-imagining and refreshing our brand, we’ve created a forward-looking identity that embraces our breakthrough innovations across agriculture, hospitality, technology and more to position us for a strong future. With our Heritage Seal living on, we maintain the history and heritage of Osceola County.

We’re excited for this next chapter in the County’s history as it further defines our reputation, positioning and goals and helps tell the story of our past and future.

Is the Heritage Seal being discontinued?

As part of our commitment to honoring and preserving the history and heritage of Osceola County, the branding process does not and will not include plans to discontinue the Heritage Seal.

Instead, the Seal will coexist with the new brand and logo, as the two serve different but complementary purposes. For example, the Heritage Seal will continue to be used on official documents, proclamations, certain government locations and more, honoring the origin, history and legacy of Osceola County.

Simultaneously, the new color palette, tagline, brand narrative and logo were created to support our region’s workforce and economic diversification goals, positioning the County as a place with skilled talent, innovation and possibility. This branding will be used across a variety of materials and channels, including the website, social media, apparel, brochures, banners, signage and more.

What did the branding process entail? Who was consulted?

In 2020, we began a year-long process to determine a forward-looking brand identity and message that reflect the current residential and business community, the municipal government and the long-term strategic vision of the County.

The branding process was an immersive, inclusive and carefully executed research-driven initiative. At the onset of the process, we contacted a large number of Osceola County residents, with more than 1,000 residents voluntarily participating throughout the year. These residents provided their insight on the community’s reputation, perceptions, attitudes, strengths, weaknesses and opportunities.

The process included one-on-one interviews, virtual and in-person focus groups, in-depth surveys and a community website inviting anyone to seek more information to ensure a variety of perspectives were received and considered.

Additionally, the survey and interview research process were extended outside our County’s borders to gain knowledge of perceptions from around the state and within key industries related to our economic future.

These insights were the foundation for informing the development of the brand identity, color palette, logo, tagline and more.

Where can I learn more?

Since the beginning of the branding exploration, we have been committed to a thoughtful, transparent and engaging process to ensure residents had opportunities to provide input and understand the initiative.

We encourage residents to review Osceola.org to read about the new brand identity and our approach for the new logo and the Heritage Seal. Additionally, we invite you to complete the linked form with questions you may have about the process.

Formerly known as Allendale, Kissimmee was incorporated in 1883 by a vote of 33 to 3, four years before the creation of Osceola County as we know it today. Kissimmee was first settled by former confederate major J. H. Allen, who was a riverboat captain. His steamboat, the Mary Belle, was the first cargo steamboat on the Kissimmee River.

Known early on as the home of the country's first bars to accommodate ranchers on horseback, Kissimmee was literally the end of the line. That was during the cowboy era which extended down to Kissimmee and acted as a catalyst for the cattle industry.

You'd be hard pressed to hear one now but starting in the 1860s the cracking sound of cowboys' whips filled the air as they drove herds of lean cattle through the scrub brush of Osceola's open ranges. Heartier Brahma cattle introduced in the 1930s improved on our beef. Pejoratively dubbed "Cracker Cowboys" by Frederic Remington in an 1895 article in Harper's New Monthly Magazine, the Florida cowboy used dogs and whips to herd their cattle with such great skill that some could kill a rattlesnake and turn stampeding cattle.

St. Cloud was founded on East Lake Tohopekaliga in 1909 and was an early home to the largest concentration of Union Army veterans in the South, hence its nickname "Soldier City." Its Mount Peace Cemetery, established in 1910, is one of the largest union cemeteries located south of the Mason-Dixon Line with more than 400 Union soldiers buried there.

Reportedly the largest sugar mill in the nation operated in the late 1800s in what St. Cloud is now. Some people believe that there are French roots to the city's name, while others say it may have come from the great white clouds that rose above the mill during the refining process.

Incorporated in 1911, the city prospered by luring veterans with inexpensive city lots, nearby farmland, and a "climate with no extremes." The first 1,000 lots sold for $50 each and the price later increased to $100 per lot. Many of the streets are named after states in the Union. According to the late St. Cloud historian Bob Fisk, this is because a street was given the name of the state from which its first settlers came.