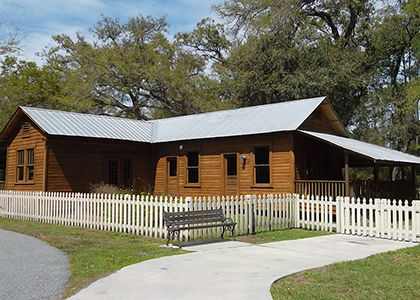 The home was built in 1911 after Judson and Mollie Steffee moved their family from Kentucky to Shingle Creek. The home in which the family had initially lived burned and was replaced in 1911 by the home presently on site. It originally had a porch on three sides and has been remodeled and enlarged over the years. Their son George married Ada, the daughter of famous steamboat captain, Clay Johnson. This allowed him to captain the steamboat Roseada to transport goods and cattle throughout the KCOL. Follow the trail to the caretaker’s cabin, where Henry Haines, one of the area’s first minorities, lived.